Former San Francisco 49er Frank Gore is moving on from his Santa Clara, CA, digs. The 36-year-old running back is ready to pass his townhome to a new owner for $1.3 million.

When he was starring in the Niners backfield in 2007, the Miami native purchased the property for $860,000. But the ageless running back left the Bay Area in 2014. Now, he’s ready to leave his California abode.

The property is close to Rivermark Village Shopping Center, the community pool, library, parks, and tech companies. It also happens to be within a couple of miles of the Niners HQ and Levi’s Stadium.

Built in 2003 with an open layout, the 1,242-square-foot home has three bedrooms and 2.5 bathrooms. And while the word “townhome” may make you think it’s ho-hum, this place has been tricked out by the owner “in ways you couldn’t imagine without seeing for yourself,” the listing notes.

Along with hardwood floors, plantation shutters, and recessed lighting, the space features six paneled doors that open for “incredible” natural light. If it’s privacy you want, there are also remote-controlled window coverings. The space also includes a deck for an outdoor seating or dining area.

The kitchen is equipped with stainless-steel appliances, granite counters, and maple cabinetry. The cook space opens to a dining area and family room with a huge flat-screen TV. An adjoining media center boasts a bar, multiple TVs, and a sound system, all included in the sale.

But what’s a professional athlete’s home without an aquarium? A custom-built, 350-gallon, two-sided fish tank separates the family room from the entertainment center, and is a focal point of both rooms.

Plus, when flat-screen TVs just won’t do, a drop-down projector and ceiling screen allow for a more dramatic viewing of movies, sport events, or gaming. A spacious deck and two parking spaces complete the offering.

Although he’s only 36, Gore is the oldest active running back in the NFL. After playing with the Niners from 2005 to 2014, Gore joined the Indianapolis Colts and then the Miami Dolphins. In 2019, he signed a one-year, $2 million deal with the Buffalo Bills. He currently sits fourth on the list of all-time rushing yards in the NFL.

For The Perfect Summer Vacation, Visit The Lighthouses Of Door County, Wisconsin 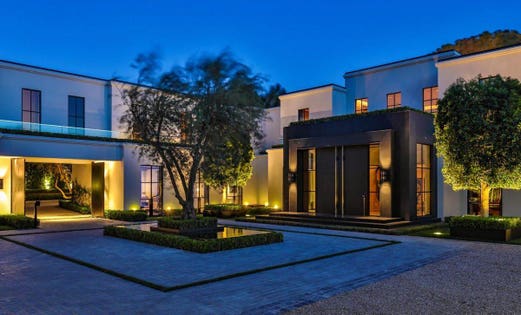 These Are the 11 Best Cities for Rosé Lovers